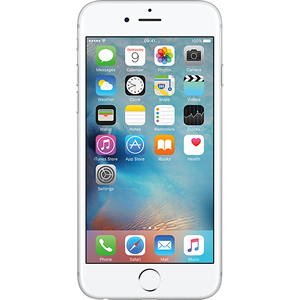 The iPhone 6 is one of the older smartphones from Apple which you can get for free on a mobile phone contract, even if you have bad credit.

The new phone comes in a variety of colours and capacities ranging from 16GB up to 128Gb (the highest capacity iPhone) and can be purchased at all the main online mobile phone shops on a contract to suit your particular requirements. Whether you like to chat a lot so would need unlimited free call minutes or you like to use the Internet or social media a lot so high data allowance is a pre-requisite, there will be a contract out there for you.

The iPhone 6 is undeniably a great phone and keeps up the tradition of Apple smartphones being at the forefront of design and functionality. It manages to retain a lot of the features that iOS users have come to know and love whilst also featuring a much larger than standard new screen. Apple have traditionally shied away from large “phablet” size screens but the big gains being made in the market by the likes of Samsung have forced Apple’s hand into producing an iPhone with a larger screen. So how does it stack up?

The iPhone 6 is thinner than any iPhone ever produced and is much less angular than predecessors. The corners are have a refined, smooth curve which is much more pronounced than in previous models. Added to the classy build quality that is standard among iPhone’s the rounded, smooth angles make the iPhone 6 beautiful to hold – you feel that you are really holding a premium phone.

There have been some early reports about the iPhone 6 bending in pockets but you can count these reports on one hand against the millions of phones that have already been sold.

The only main change to the iPhone 6 buttons when compared to say the iPhone 5s is that the power button is no longer on the top of the phone, it has been moved to the side of the phone so that it is opposite the volume buttons. My personal preference is to have the power button on the top because with one handed use it is possible to accidentally click the wrong button as they are opposite each other rather than being completely out of the equation at the top of the phone.

The screen is what we have come to expect from an iPhone, just bigger. At 4.7 inches the screen is the largest of any iPhones bar the iPhone 6 Plus. The display is and LED lit IPS LCD capacitive screen with a 750 x 1334 resolution which is not that impressive compared to other recent phones such as the LG G3. In fact this display is the same going back to the iPhone 4. There are obviously more pixels on the screen as the display is larger, but they are not more tightly packed together so the quality of the display is no better than in the last couple of iPhones. If you have owned an iPhone before you will know that their screens are excellent so you will still be getting a phone with great contrast and realistic colours, but if you looking for the absolute best display in class you won’t find it on the iPhone 6.

The A8 chip is being debuted in the iPhone 6 and this offers a much greater improvement to the A7 chip used in its predecessor. The processor is dual core which is theoretically half the processing power of the many quad core processors that are currently being used in many Android phones such as the Samsung Galaxy Note 4, and the 1GB is RAM is also much less than the 3GB of RAM on the Note 4.

On paper the iphone’s often have lower specs than equivalent market leading phones from other manufacturers, but Apple are able to calibrate the components to levels of performance that are astounding. Technically, the higher specified phones such as the LG G3 or Note 4 should be able to run rings around the iPhone 6, but this isn’t the case. The iPhone 6 scores in the top handful of phones in all the performance benchmark tests that are thrown at it. When you add in the usability, features and intuitiveness of the iOS8 operating system you have a winning package.

The camera has an 8 megapixel capacity with the usual 1.2 megapixel front facing camera. These are the same specs as the iPhone 5s. A little disappointing maybe, but the ultimate test is in the quality of the pictures which does not disappoint.

Apple introduced a new feature to the camera called “Focus Pixels”. This feature is intended to focus on objects faster and give you better end shots with more settings to choose from. From experience, this works and it does indeed produce better shots than the iPhone 5s – particularly at night or when light is fading.

The video recording facility on the iPhone 6 has been given an upgrade. You can now record video at 1080p at 60fps instead of the previous 30fps. Slow motion and time lapse video capture has also been given welcome upgrades.

One of the big questions prior to launch was whether the iPhone 6 was to include a better battery life as some commentators believe that battery life was one of the major iPhone weak spots.

So what is the battery like? In short, a little better. There is no earth shattering improvement in battery when compared with the iPhone 5s. I would say maybe a 15% improvement on battery life all things considered. However, if battery life is a deal clincher you may want to take a look at this phones big brother, the iPhone 6 Plus as there is a definite increase in battery capacity on this monster of a phone.

The iPhone 6 is up there with the best phones on the market today. Technically the specifications on the phone make it (and the iPhone 6 Plus) the best iPhone ever made, but there is increasing competition from other manufacturers such as Samsung, HTC and LG (particularly in the fields of large screen smartphones), so previously a new iPhone would invariably become the number one phone on the market by default. Due to the enhanced competition this is no longer the case so instead of recommending the iPhone 6 as the best phone out there, it can only reasonably be argued that its “one of the best phones” on the market at the moment.