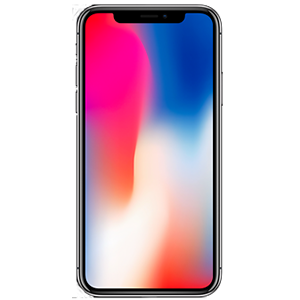 The iPhone X was announced in late 2017 alongside the iPhone 8 and iPhone 8 Plus to much fanfare as being the most expensive and most highly specified iPhone ever but it would be fair to say that it received mixed reviews largely due to the high price tag and the “notch” styled screen.

The iPhone X can be bought in either a 64GB capacity or a generous 256GB capacity in silver or space grey and we feature a variety of contract deals from the main online phone shops and networks.

There are particularly good deals on offer for iPhone X refurbished models so you could get the power of the X with the lower cost of a refurb. Remember if you are looking for a bad credit iPhone X deal you will stand a better chance of passing the credit check by paying a deposit upfront for the phone.

The iPhone X is a device that received a mixed reception when it was launched in late 2017 and to this day it polarises opinion.

The design was a departure for Apple from previous iPhone models. Strikingly on the iPhone X there was a notch cut out of the top middle of the screen to accommodate the phone sensor and the removal of a physical “home” button. The removal of the home button was in line with what other phone competitors were doing at the time so couldn’t be considered as ground breaking but the “notch” at the top of the screen which encroached into the screen was a gamble. It is open to debate as to whether that gamble paid off because there was much mocking on social media at the time of launch and the iPhone X was officially discontinued after only 10 months of production (the shortest shelf life of any iPhone). Although recently Apple has resumed production of the device due to slow sales of later models.

The build quality of the iPhone X cannot be questioned. It is made from surgical grade stainless steel with glass at the front and back of the phone. QI wireless charging is offered as standard and the screen is a 5.8 inch OLED with a contrast ratio of 1,000,000:1.

Ultimately the overall aesthetics of the phone are dominated by whether you are a fan of the way the notch has been incorporated into the screen or whether you think it detracts. Given that at launch time the iPhone X was the most expensive phone ever, at £1,000 to buy outright you really want the phone to be perfect to want to spend that much money.

At the time of launch, although a great phone, it was difficult to justify buying one or taking out a contract simply because of the huge costs. This is now less of a concern because newer models have been released which mean the price of the iPhone X has reduced significantly.

Apple are releasing a large number of refurbished iPhone X phones so you could get a very good refurb iPhone X contract deal.

Our comparison tables show the best contract deals from the main phone providers online. As this is still a relatively expensive phone, if you are looking to get a bad credit iPhone X contract it would be advisable to pay a deposit towards the cost of the phone as this will be a contributory factor in helping to pass the contract credit check.